There are many user groups, meetups, developer groups, etc depending on where you live that are available to get involved in.  This is one of many ways to meet other developers, see what they are doing, what projects and so fourth are going on in your neck of the woods that you wouldn't necessarily know about.  But, one thing that I'll say is that the format is about the same from the 3-5 groups that I participate in the Central Florida Area.  I even run a Windows Phone/8 group here too, and the same could be said.

Now, one thing that I wanted to do was sponsor contests. So I started the Dark Sky App contest to try and put a little something different into the mix, but I wanted to throw the general question out to the world.  What do you as a developer, designer, etc. want out of these types of groups? 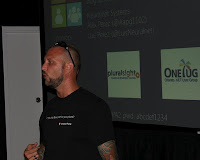 Typically it's a meeting where on or a few people present on a topic, there is some Q & A and generally some free stuff given away.  Now I'm always good for some free nerdy swag or a book, and I will never discount the general social interaction that I get from these groups. Not to mention I have made some pretty good friends and networked with really cool people along the way.  Is that all we are looking for?  Is there something else you "need" from these presentations or gatherings?

Introduction Telerik recently released their Windows 8 UI Controls to RC on September 18th (see post here), and this is probably on the first in a series of posts I will put out showing them off. The first control here is the RadCustomHubTile.  I

Find Amber Available for Windows Phone Find Amber has finally been approved and is now available in the Windows Phone Store! This project is close to me, and not in a "I have lost a child" way thank God. But I do