One of the new features in Visual Studio 2015 for ASP.NET 5 is an agile development environment. What that means is now when you makes changes to your code, there is no need to re-compile to see the changes in the browser.

Visual Studio uses the Roslyn compiler to enable this dynamic compilation. You still have all of the structure and power of a compiled framework, but the development experience feels more like an interpreted language. See more here - ASP.NET 5 Overview

This is a great new feature for Visual Studio users, but the new awesome is you now have a choice of what IDE you may use. That's where kmon comes in.

kmon, pronounced kuh-mon, is an ASP.NET project command that watches the working directory of your project for changes to the files and restarts the web server automatically so that you have the same frictionless development experience that Visual Studio is presenting through the use of the Roslyn compiler.

This process is accomplished through wrapping nodemon, a node module that is designed to watch files and restart and/or execute processes.

Adding kmon to your project

Next, you need to add the command to the commands portion of the project.json file and set the options.

If you are using Brackets, for example, as your editor; open terminal and cd to your working folder and run the following command:

Now you can open the application in a browser, note the server url that is defined in the kestrel command within the project.json file "kestrel": "Microsoft.AspNet.Hosting --server Kestrel --server.urls http://localhost:5004"

Here is a shot of the Brackets editor, note the Name = "Shayne Boyer" of the User class. 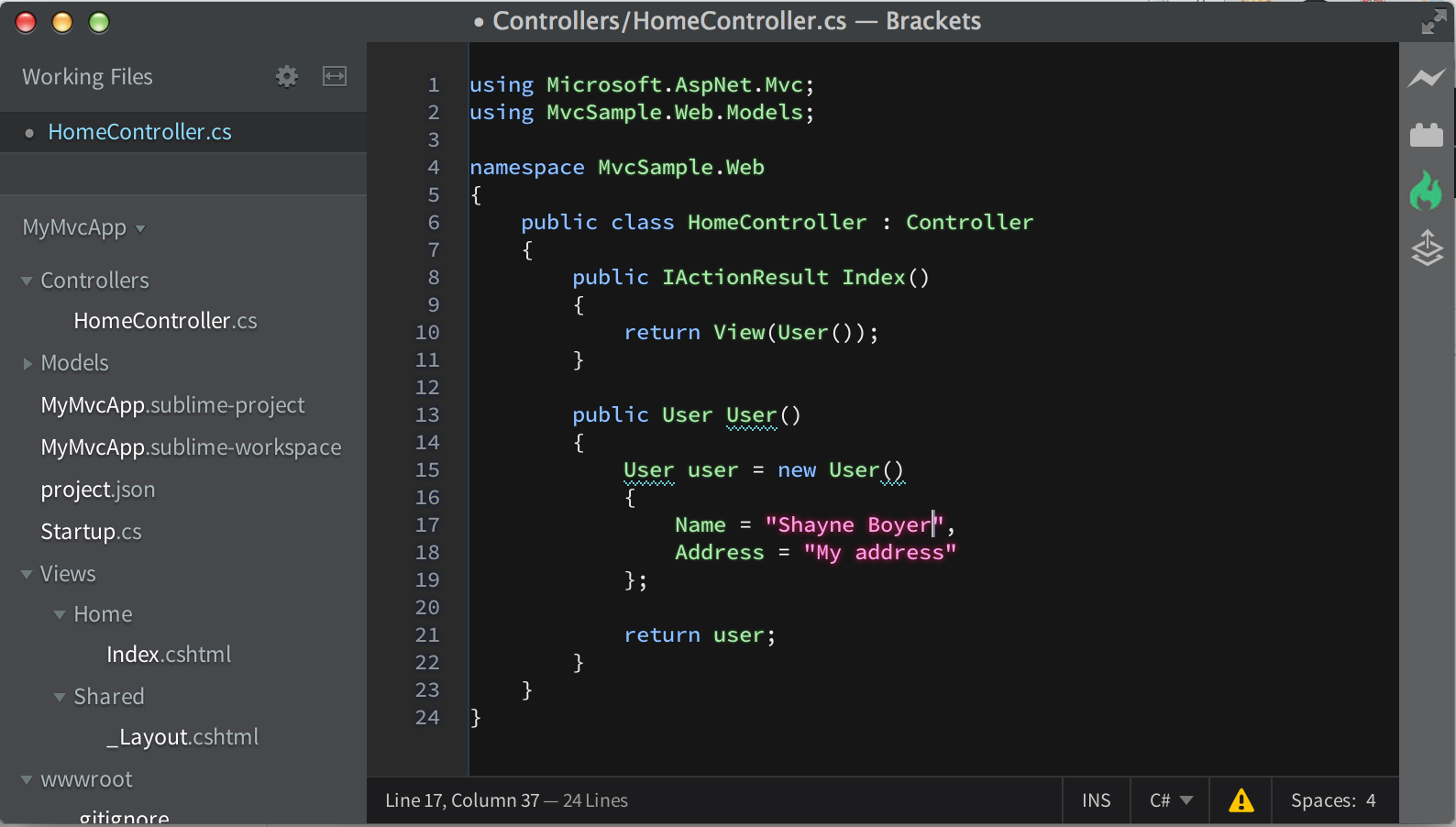 I change the Name property to kmon! and hit save in Brackets, nodemon detects the changes, and restarts kestrel.

Go back to the browser hit refresh and we are set. No rebuild step, no shutdown of the browser etc.

Using Sublime Text and the Kulture add-in you can get a UI experience and not have to use the command line.

From Sublime Text do CMD + Shift + P, Run K Commands and you will see that the k mon command now shows in the options. Click the command and you will get the same experience. 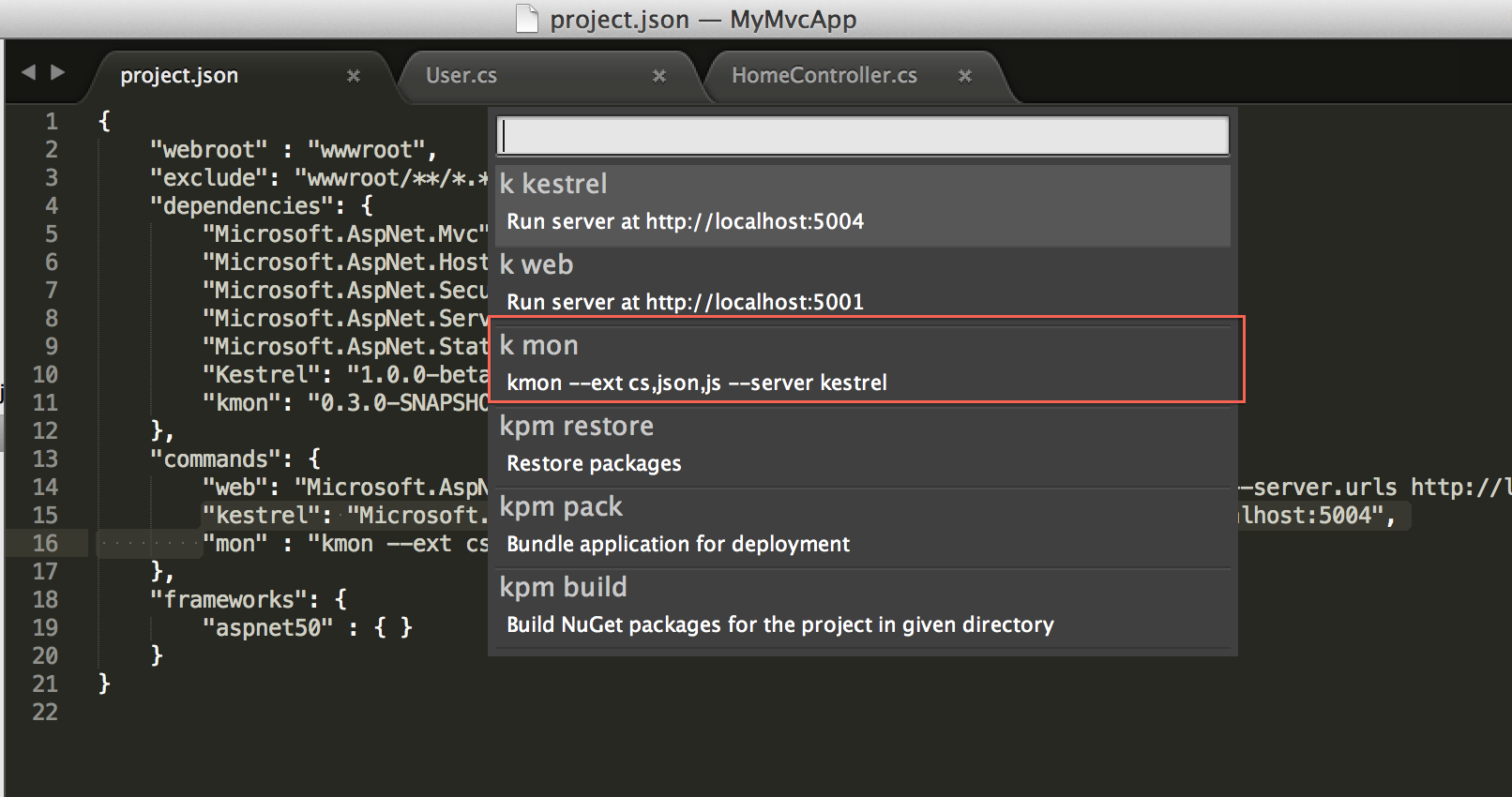 Good question. Sure you can certainly use Gulp for example. There is an add-in gulp-aspnet-k that works.

Here were the options that were on the table, when it was proposed - summarized from OmniSharp/Kulture - Issue #5 it was originally called kestrelmon

Kulture and other editors have built in support for discovering and invoking commands in project. This is how kestrel,web, etc show up in the respective editors. So if we create a new command (that ships in a NuGet package) and users add an entry in the commands section pointing to it things will just work. When this command is invoked it will make the appropriate call to nodemon. This will work for editors and command line users.

2. Update Kulture and bake it in

Kulture currently has built in support for kpm restore,kpm build & kpm pack. This is added to the sublime command list here. We could add a new kestrelmon command there as well.

In short, Option 1 gave more reach to all editors and long term options.

Would love to see some feedback, feature requests - if there is something else we need this to do? Or keep it simple??

CodeProject ![gulp image](/content/images/2014/12/gulp.png) If you have done any typescript development in Visual Studio in previous versions, you more than like are using the Web Essentials add in to perform the compilation to Javascript. Another option is to add

Developing ASP.NET 5 applications using Visual Studio 2015 gives you a rich IDE experience, however now with ASP.NET now being cross platform that development IDE is not afforded